Jules Verne predicted the Apollo missions to the moon. Star Trek predicted cell phones, tablets, and other modern gadgets. And Knight Rider predicted automotive technology that was science fiction in the 1980s, but is common in the cars of today.

The show hasn’t stood up well to the test of time. The 2008 remake of the series was a flop. Most of what Knight Rider has going for it these days is the 1980s nostalgia factor. Regular Car Reviews recently checked out a KITT replica.

Mr. Regular’s conclusion was basically that the 1982 Pontiac Trans Am that KITT is based on is a lousy car, but who cares? It’s KITT, it looks great on TV, and that’s all that matters. I agree with him.

Much of what made KITT look great on TV was all the assorted gadgetry on board. It was all very futuristic in the 1980s, but some of KITT’s features have become real, or could be very soon.

It may have been futuristic or impossible in the 1980s, but you may already have some Knight Industries technology in your own car right now.

Let’s start with the most obvious example. Michael Knight often would pull up a map on KITT’s one or two screens (depending on which season you’re watching) to plot a course or track the bad guys. Navigation is available today on all but the cheapest new cars. Even my Subaru BRZ, one of the cheapest sports cars you can buy new, includes navigation as standard equipment. If you don’t have it, you can use your phone, or a standalone GPS unit.

In fact, there used to be a Knight Rider GPS available from Radio Shack, complete with KITT’s voice of William Daniels calling you by name and telling you where to go. I wanted one of these so badly, but I couldn’t justify the steep price tag. 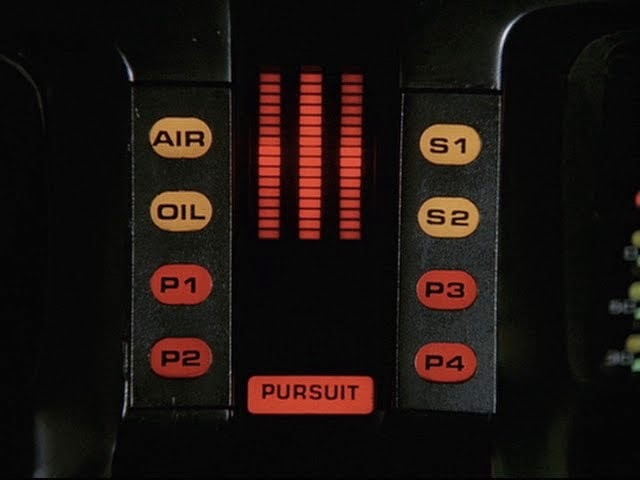 Talking cars existed even before KITT’s time. Nissan was way ahead of the game on this, with their infamous “Your door is a jar” (no it’s not, it’s a door) voice warning in Z cars and the Maxima. I even found this video demonstrating a voice warning on a 1981 Maxima, from before Knight Rider even aired!

Of course, today’s voice systems are much more sophisticated than simple warning phrases. With more and more laws prohibiting the use of handheld devices while driving, hands free systems are becoming more and more advanced. About all I trust my BRZ to do is make a phone call. It’s easier to pull over and use the touchscreen to program its navigation than to fight its clunky voice command system (I usually use Waze instead). But SYNC 3 in the Ford Focus ST I recently tested worked rather well for setting a navigation destination as well as for phone calls. Though not the witty banter between Michael Knight and KITT, it got the job done of basic two-way voice communication between human and car. If that’s not good enough, you can just ask Siri.

For privacy, or to hide the fact that KITT was driving himself, the windows could automatically change from transparent to opaque and back. Wouldn’t this be a great way to get out of a window tint ticket?

Well, you can! Companies such as EAT Glass offer electric window tint systems that work exactly like KITT’s. No guarantees about dodging that ticket, though.

According to Wikipedia, “KITT is armored with “Tri-Helical Plasteel 1000 MBS” (Molecular Bonded Shell) plating which protects him from almost all forms of conventional firearms and explosive devices.” This allowed KITT to drive through all kinds of nasty conditions, from vehicle contact to gunfire to explosions and even through walls, without even suffering a scratch. And as anyone who has ever owned a black car knows, that’s a particularly difficult color to keep clean.

Though the BMW X5 Security doesn’t look nearly as pretty as KITT after getting shot up, it still keeps its occupants safe from harm. Best of all, unlike a military vehicle, the X5 Security doesn’t look any different from a standard X5. Several manufacturers offer vehicles resistant to attack, and there are companies that can add such protection to pretty much any car you bring them.

In season four, RC3 added the “C” button to KITT’s dashboard, which transformed the T-topped car into a sweet looking convertible.

But retractable hardtops are nothing new. All the way back in 1959, the Ford Fairlane Galaxie Skyliner had a retractable hardtop very much like KITT’s. It wasn’t until more recently that these started to become common, though. The Mercedes SLK re-introduced the concept, and since then manufacturers from VW to Lexus have introduced their own versions. Even the last generation Mazda Miata could transform from a convertible into a coupe with its power retractable hardtop option, and we’ve already gushed over how awesome the MX-5 RF is.

Another season four “improvement” was KITT’s Super Pursuit Mode. This radically altered KITT’s bodywork to allow a top speed of 300mph. To me, it looked like KITT was falling apart, which is a more realistic state for a 1982 Pontiac. Trust me – my first car was also a 1982 Pontiac, though mine was a 6000, not a Trans Am.

Modern supercars have spoilers and wings and things they can adjust on the fly for better grip and aerodynamics at high speeds, just like KITT’s Super Pursuit Mode (and much better looking, in my opinion). It’s not just supercars, either. The Porsche Boxster has an automatic wing that deploys at higher speeds. So did the Volkswagen Corrado. And though the Ford Focus ST has no visible variable aerodynamics, it can open part of the grill for extra cooling when needed, or shut it to improve aerodynamics. We’re living in the future, my friends.