Sometimes you get more than you bargained for when you take on a project. Sometimes it’s as simple as noticing a frayed belt that needs to be replaced while you’re changing your oil. Other times it’s failed lifters in a Jeep 4.0, which requires pulling the head to repair. When you find yourself in over your head (pun fully intended) you need to evaluate what your best course of action will be – fix it yourself, get help, have a shop fix it for you, or cut your losses and get rid of it.

I’ve recently considered all of these options with Project MJ, my 1988 Jeep Comanche that has that Jeep 4.0 with failed lifters under its hood. Here’s how my thought process went. 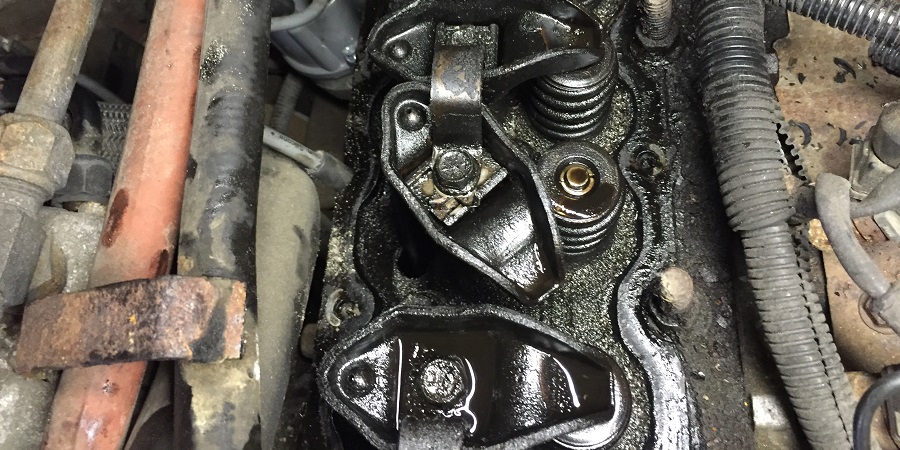 I knew I was signing up for a bit of work when I took on Project MJ. I needed to make it street legal again, replace some doors and body panels, reassemble the interior, and then modify it into ultimate rally sweep vehicle. It’s a bit of work, but no real problem. I’d already started making some good progress when the engine started tapping badly – far worse than the normal lifter tick. After the initial panic that I’d killed the motor, I determined that it suffered from failed lifters in the #2 cylinder. A bit of research showed me that although I’d have to pull the head to do it, it’s a fairly simple job. So I ordered the parts and prepared to dive in.

After the parts arrived, I found myself making excuses to myself to not start this job. I had to do some unpacking from moving, or go review some cool Hondas, or paint my horse. I was scared of ending up with a useless lump of Jeep in my garage that I couldn’t fix. That happened to me once before, with an ex’s Honda CRX Si that I couldn’t manage to fix.

At first, a 1988 Honda CRX Si for autocross seemed to be an awesome idea. Not only are they fun cars in and of themselves, they also shared many parts with the RT4WD Civic wagon I had at the time, including the D16A6 motor. But this car was badly abused before we got it. This photo is from its one and only autocross outing. As soon as I’d fix one problem, three more would crop up. My ex had complete confidence in my ability to conquer these problems, but she overestimated my skills. (I should point out that she did not become my ex because of this car.)

Eventually I overcame my procrastination with the Jeep, and figured I’d start by draining the oil and coolant. How hard could it be? I started with the coolant, figuring that if anything went wrong here, I’d still have the oil, and could start and move the truck if I had to. I found no drain plug in the cooling system, being the older Renix system and rather stupid. It seemed the best way to drain the coolant was to remove a lower radiator hose. I removed the air box to give me better access. The pinch clamp was stubborn and in a bad place. I finally bought some needlenose Vice-Grips to hold it open, then crawled underneath to work it loose. The hose wouldn’t budge, despite having nothing but friction holding it onto the motor. There was no way I could stick a flathead screwdriver in there to try and pry it off. I could always just cut the hose and replace it later, but I couldn’t even see where the other end attached to the radiator. What was supposed to be a very simple job of detaching a simple radiator hose was already spiraling out of control. If I couldn’t even handle this, how was I supposed to pull the head and have the motor ever work again when I was done? My confidence in my own wrenching abilities was obliterated, all because of a stupid hose. It was time to consider other options.

As some great philosophers once said, “I get by with a little help from my friends.” This is how cars stay in rallies after they break on stage – at least, most of the time. Not that you can see me in the photo, but this is how a crew and I spent most of a night at Black River Stages 2011, trying in vain to squish Eric Wages’ split strut tower back together after he hit a rock on the final stage of the night. Maybe this isn’t the greatest example, but generally speaking, getting some help, whether they’re an expert on the particular repair you are doing or simply someone you can tell “Grab me a 13mm socket,” or even “hold this,” can make a huge difference in your ability to successfully complete a job.

When I posted about my lifter situation online, I got many replies. Nearly all of them told me how simple the job was, don’t give up, you can do it. The evidence presented so far does not support that theory. It may be simple for someone who knows what they’re doing, but I only have a basic idea of what’s involved, and am figuring this out as I go. It’s also been several years since I’ve had the benefit of a garage and worked on my own cars, so like the typical New England car, I’m a bit rusty. If the job is so easy, why don’t you come show me how it’s done? Most responses to that reminded me of that Xfinity commercial – “I’ve got a full plate,” “I’m all tied up,” “I’m completely buried.”

To their credit, a couple of people did offer to come over and help me out. That’s useful. But along with my skills, my equipment isn’t what it once was. All of my air tools remained in Maine when I moved back to Massachusetts since I had nowhere to store or use them at the time. A lot of my hand tools have disappeared over the years since I last did any serious wrenching as well. I may have a friend’s expertise on hand, but the usefulness is limited if I don’t have the right tools for the job. All those trips to the hardware store add up, both in cost as well as lost time. The feelings of being in over my head only got worse.

I’ve had several occasions over the years where I would attempt a repair myself to save money, get in over my head, and have to take it to a shop anyway. It ends up costing more in the end. I’d already bought the parts at retail price, and then I still had to pay the shop labor rates. Some shops will even charge you more if they’re using parts that you provide instead of sourcing their own. Others refuse to use customer provided parts at all. Finally, it’s more work for a shop to fix what the customer messed up in addition to the original repair than it would’ve cost to just take it there in the first place.

I just moved, and don’t have a “local guy” yet. I like to try out shops with something simple, like an oil change, to see how that experience goes before bringing them more work. I had no desire to open my checkbook to an unknown shop for a job of this magnitude. It could easily end up draining more than I have, and more than the Jeep is worth.

What Project MJ has become is not what I signed up for. I don’t blame the seller at all. Aside from the dead battery that I knew about and replaced, the Jeep ran and drove perfectly when we got it. But as I saw my other options fading away, I was left with the dead chunk of metal stuck in the garage that was precisely what I didn’t want. I was stressing out. My fiancee didn’t want me stressing out. I didn’t want to stress out. If what I had in my garage was, indeed, a dead chunk of metal, and it was beyond my ability to repair or do anything else with it, only one option remained – make it go away. We pondered what we’d do instead. For what we had in the Jeep, we could pick up a half decent XJ Cherokee. It would do everything we wanted, but we could get a much newer one, without many of the issues the MJ has. And aside from the parts they share, Cherokee parts are far more common.

So I decided to get rid of the Comanche. 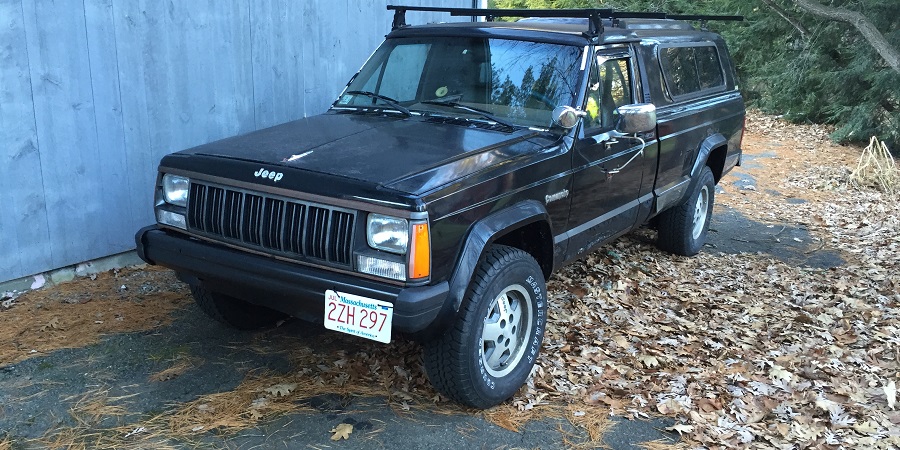 As I was about to start posting ads on the appropriate forums and on Craigslist, my friend Jonah dropped me a line and offered his help. Not only is Jonah an old friend of mine, he also runs his own shop, FIX in Keene, NH. Though I could pay him to fix it for me, his offer is pretty much the best case scenario for me. Rather than getting stumped by doing it alone, I’ll have a friend to help me. Not just any friend, but a very experienced, knowledgeable friend who does this for a living. We’ll also have the resources of his shop behind us, which solves the issue of my own garage being unequipped for such work. I’ll basically have the same kind of help with Project MJ that Mr. Regular has for the Vagabond Falcon. We’re both getting our hands dirty and doing much of the work ourselves, but we also have professional mechanics working alongside us, and professional facilities for doing the work.

So Project MJ is saved. I’m very happy about that. I’m stubborn. I hate to admit failure, especially publicly to all of you. Thanks to Jonah, I won’t have to. Once the current project he’s helping with is out of the shop (which is very cool in itself and that I hope to review), the Comanche takes a flatbed ride to New Hampshire, and we schedule some time to dive in. I’m probably going to miss my goal of having it ready for the Club Motorsports RallySprint in a month, but that’s OK. I’d rather know the job is getting done right and have it take a bit longer than rush through it, then blow the engine on the way to the RallySprint. It’ll miss most of the winter in which it was supposed to be my daily driver, but it’s been so mild that continuing to drive my BRZ isn’t a big deal.