I like my Subaru BRZ. I really do. When I got it in early 2014, I was single, living in an apartment with my cat and no one else. The largest thing I had to transport regularly was my Hoyt Pro Medalist recurve bow. Since then, I’ve married a woman with two growing boys who don’t fit in my back seat, and bought a house that requires many items that are too large for my car. Her Ford Flex saves our butts in that area, but it would be much more useful if I could help with some of the people and stuff transporting duties as well. Also, my manual shifter hurts her shoulder to use, meaning that if we take my car somewhere far away (like Pennsic or Red Bull GRC) we don’t have the option to change drivers.

So I’m pondering switching out my BRZ for something a bit more practical, but that won’t give up the fun, either. I’ve narrowed my choices down to three: The Subaru WRX, the Ford Focus ST, and the Volkswagen GTI.

The WRX seems a natural progression from the BRZ. They’re both Subarus, powered by the same FA20 motor. When I compared the BRZ and WRX I was quite impressed, and said that if I had to decide between the two cars, I’d go with the WRX instead of the BRZ. That remains true today. But what about compared to its true competitors?

Josh briefly owned a 2015 WRX. He was less enthusiastic about it than I am, so much so that he traded it in on a 2008 BMW 535i after just 7,000 miles. He’s accustomed to the quality and luxury of BMWs, which you’re not going to get in a Subaru. I, on the other hand, am accustomed to the lack of luxury in my BRZ, and the WRX is a step up in that department. 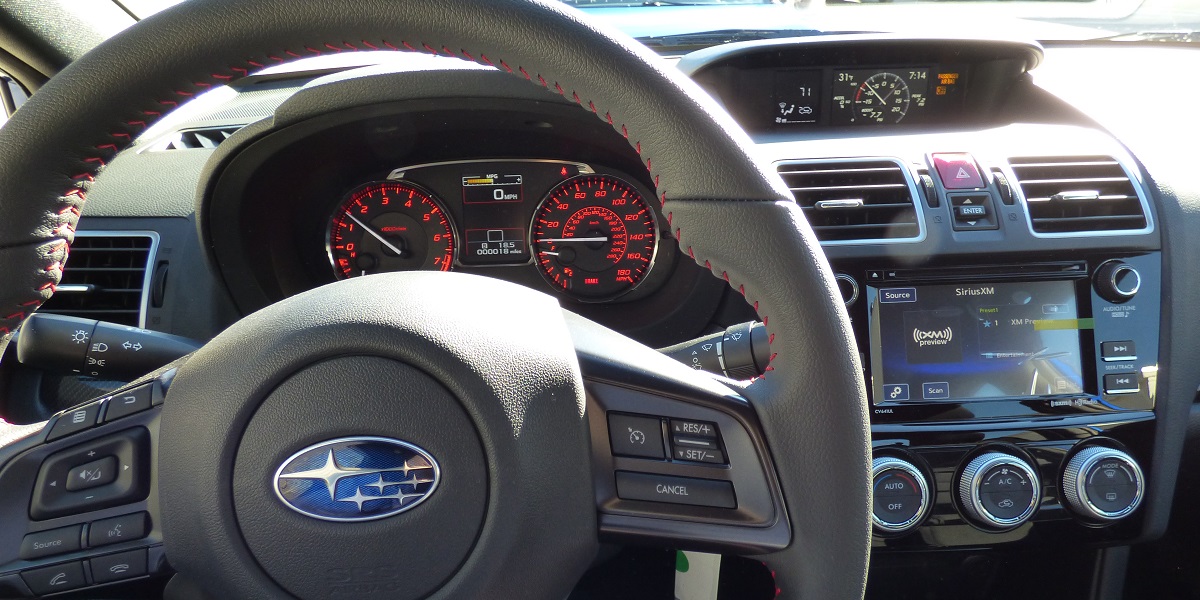 The interior is a much nicer place to be than the BRZ. Controls are familiar, but different, a generation beyond those in the BRZ. It was more comfortable, and definitely more practical. It easily passed the sit-behind-myself back seat test.  The WRX’s main advantage over my other choices, of course, is all wheel drive. Not only is this useful in winter, it’s also useful for putting the power to the ground effectively in any conditions rather than lighting up the tires. This is particularly useful since, at 268hp, it has the most powerful engine of the three.

All is not rainbows and unicorn farts in Subaru land, though. The WRX is now only available as sedan, not a hatchback. The timing of this is terrible, especially considering that Ford Focus RS obliterates the Subaru STi not only in performance, but, as a hatchback, in practicality as well. The WRX’s trunk is generous, though, and the back seats fold down, so there’s still plenty of room. But it’s no hatchback.

Also, if, like my BRZ, my wife finds the manual transmission painful to use, the other transmission choice is a CVT. RFD’s Michael Thompson liked the one he drove, but I’ve caught, passed, and left behind a CVT WRX on the track in my BRZ. That shouldn’t be possible, considering the WRX’s extra 68hp, despite my cornering advantage. And the WRX driver was an ex-cop, with all the extra training behind the wheel that goes with that job, so I don’t blame a slow driver (unlike the Porsche 911 I passed earlier that day). I can’t help but think I’d be forever cursing that transmission for spoiling an otherwise great car.

This is the choice with which I am currently the least familiar. But Will had a Focus ST for a while, and thoroughly enjoyed it. For him, it seemed to be the perfect combination of fun and practicality, so it’s definitely on my radar. I could tell that my bare bones 2002 Focus had a great chassis that would respond well to a performance rather than economy setup, and I can only imagine how much better a current model is.

I’m already a fan of Ford’s EcoBoost motors thanks to my wife’s Flex, which is blessed with the 3.5 V6 version generating 355hp. The Focus ST makes do with a 2.0 four cylinder, but it’s still good for 252hp, not much less than the WRX. The main difference is all that power goes only to the front wheels, not all four of them. Torque steer and wheel hop can come into play when you’re trying to shove that much power to the front.

At Red Bull GRC I had the opportunity to sit in a Focus RS. While not an ST, it’s the same chassis with the same dimensions. It did about as well as the WRX in the sit-behind-myself test. It’s not bad, but I expected it to do better, being a hatchback rather than a sedan, but the way the roof slopes down toward the back cuts headroom a bit.

Thanks to our friends at Ford and a Focus ST’s brief visit to Boston’s press car fleet, I’ll be getting to review one that looks just like this next week. This will be a great extended test drive for a potential future purchase, as well as a car review. We’ll see if it’s something my wife can shift, since the Focus ST is only available with a manual transmission. We’ll also see how well the ST controls 252hp to the front wheels, or if it’s a wild torque steering monster. Keep your scanners peeled to RFD to read more about this car.

Josh got to try one of the first Mk7 GTIs to hit American shores (actually it never saw the ocean, because hecho en Mexico) back when Will had his Focus ST. He said it was more expensive than the ST, but also more grown up. I would tend to agree based on my experience in Allison’s more expensive Golf R. Josh also said that he didn’t feel like the car needed an extra 50hp, which is particularly interesting because that’s about how far down on power the GTI is compared to my other choices (210, or 220 with the performance package).

I sat in a GTI as well as a Focus RS at Red Bull GRC, and I believe the GTI has the best interior of the three. It also has the best back seat, as it was the only car where my head didn’t brush the roof. Additional refinements include Dynamic Chassis Control. The GTI’s version is more basic than the Golf R, but it still allows you to tune the suspension stiffness on the fly, which is wonderful for a car that sees lousy Massachusetts roads as well as fun twisties and the track. It’s an option, but a box I would probably check.

If my wife is unable to shift her own gears, the GTI and its DSG transmission might be the choice for me. It’s a true dual clutch gearbox, not a slushbox automatic or CVT. It has the performance of a true manual – faster, in fact – with the lack of a third pedal. It can also be run in full automatic mode, making it the most comfortable car to drive in traffic. The original hot hatch has evolved into a refined German sports sedan without the trunk. 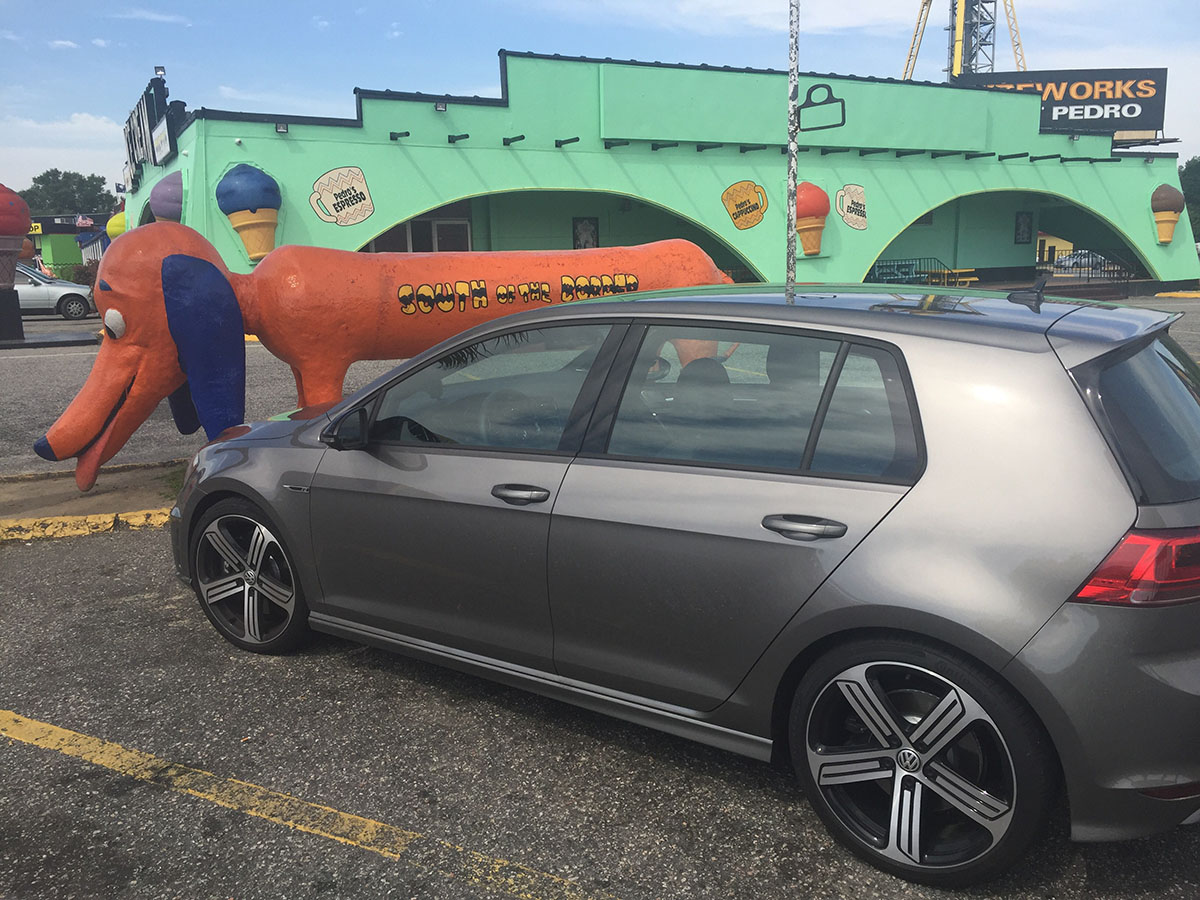 Though Ford is letting me try a Focus ST and my local Subaru dealer let me review a WRX, Volkswagen has not enabled me to try out a GTI. It seems that Josh and Will blasted through an unmentioned 500 mile limit on the Golf R they reviewed, putting RFD on their ban list for a while. Unless I can find a local privately owned GTI to review or hit up a not-so-local VW dealer for help, sitting in a GTI is the most I’ll be able to do for a while. That’s too bad, since I’d really like to try the DSG for myself. (I have a pretty good idea of how the manual feels from Allison’s Golf R.)

So What’ll It Be?

I don’t know. We’re still recovering from buying a house, and any car purchase will likely wait until next year at this point. Maybe some other contenders will become available before then, like a new Honda Civic Si sedan or a new Mazdaspeed 3. Maybe the market will flood with Focus STs traded in on the RS, making it the best option on price alone. Or maybe VW GTI prices will drop because Dieselgate. Who knows? I’ll just have to wait and see.